Sanctions and the Persian Rug Trade

As the U.S. prepares to withdraw from the Iran Nuclear Deal, now is the time to invest in Persian rugs

The Rugs We All Know and Love

As early as the Renaissance, Persian rugs have had a powerful hold on the Western imagination. You can find them in paintings by Vermeer and Rubens. Hundreds of years later they even showed up in Virginia Woolf’s now classic modernist novel Orlando and as the title of the early Jazz tune “Persian Rug,” played by Fats Waller.

The mystique of the Persian Rug, had just as much to do with its high cost as it did with its exotic origins. It was an immediate marker of wealth and social status, and by the Victorian era, it was a sign of upward mobility. Owning one meant that you had safely carved out your place in the burgeoning middle class.

Today, the Persian Rug is still an awe-inspiring luxury item, but it’s one that is very familiar to us. Whether we remember seeing Persian rugs in our grandparents living rooms, or have only ever stepped foot on cheap knockoffs, the odds are that many of us can picture what they look like. Almost instinctively, we envision the vivid colors and intricate designs, the deep burgundies or navy blues interwoven with ornate, ivory or gold floral motifs. 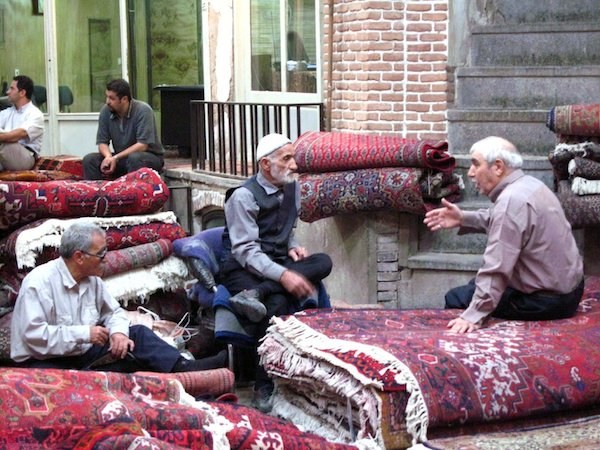 By August 6th, the grace period for withdrawing from the Iran Nuclear deal will come to a close, and the first set of sanctions will be re-enforced. These will affect Iran’s trade in dollars, precious metals and industrial materials, its sovereign debt, its car industry, and its export of two of the country’s most culturally iconic goods: pistachios and, of course, carpets.

What does this mean for one of Iran’s largest industries, small rug retailers like the Navab Brothers, and rug lovers here in the U.S.?

The truth is, Iranian rugs have been going through hard times since the Islamic revolution of ’79. Sanctions, which were imposed from the late 80s through most of the nineties, and then re-enforced again in 2010, have been a consistent blow to the industry.

Add to that the economic turbulence and lack of quality-control following the revolution, increased competition from China and India, and changing tastes both inside and outside the country, and what you’re left with is an industry struggling to keep pace with modernity.

Iran’s rugs are still among the finest in the world. But, there is an enormous amount of variety in the market. It takes a discerning, expert eye to acquire the high quality ones. With the sanctions renewed, specialists like us will no longer be able to hand select hard-to-find tribal pieces, or discover new innovative productions that we can then introduce to our customers.

Several months ago, we received what is likely be our last shipment of rugs from Iran. They’re older tribal rugs made by the Qashqai tribe in Fars province, on the outskirts of Shiraz. These rugs, traditionally used in nomadic tents or village homes, reflect a simpler, and rapidly vanishing way of life.

The Qashqai are a Turkic speaking people who migrated to Iran from Central Asia in the 11th and 12th centuries, and, until the recent past, had pursued a pastoral life outside of larger towns and cities, traveling to the Zagros mountains in the summer, and to the riverbeds southwest of Shiraz in the fall. 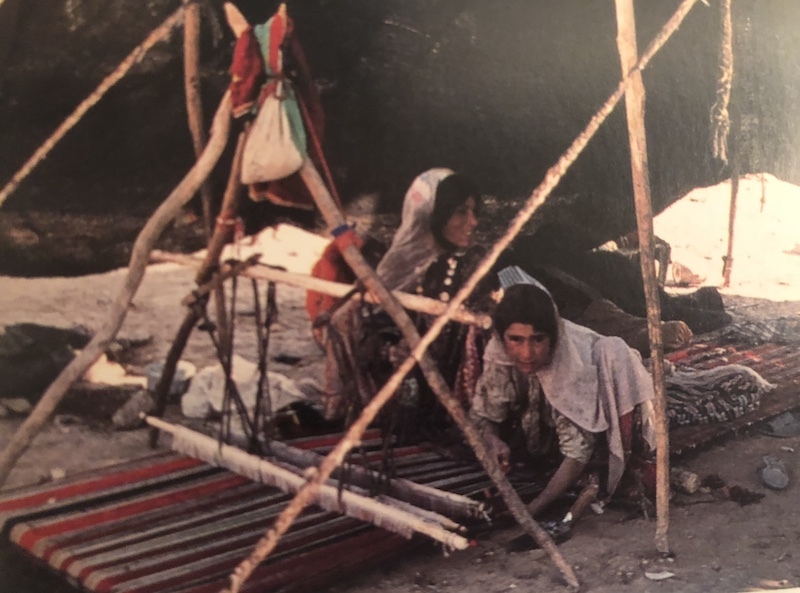 Qashqai weavers at their loom in the 1970s. Image by James Opie, from his book Tribal Rugs 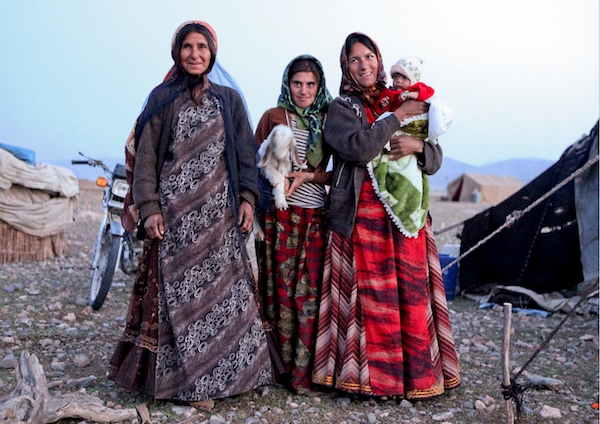 A more recent photo of Qashqai women at their nomadic camp north of Shiraz. Image by Ninara (2011) via Wikimedia Commons

They are known for a variety of textiles, such as rugs, saddle bags, cargo bags, kilims and ceremonial blankets. Their design repertoire includes grains and floral motifs such as paisley patterns and Cyprus trees as well as animal motifs such as goats, dogs and birds. They dye their wool in deep and vibrant blues, ruby reds, and magentas that are made from natural sources like indigo, pomegranate peels, and madder root.

The pieces we've chosen for Navab Brothers are rare examples of Qashqai weavings. Because of their wash, they have a unique luster and brightness. And, while most are typically made for smaller homes in tribal areas of Iran, those we have brought back are room size, making them a perfect fit for cabins and lake homes in Minnesota and Wisconsin or for Southwest style homes in Arizona and New Mexico. 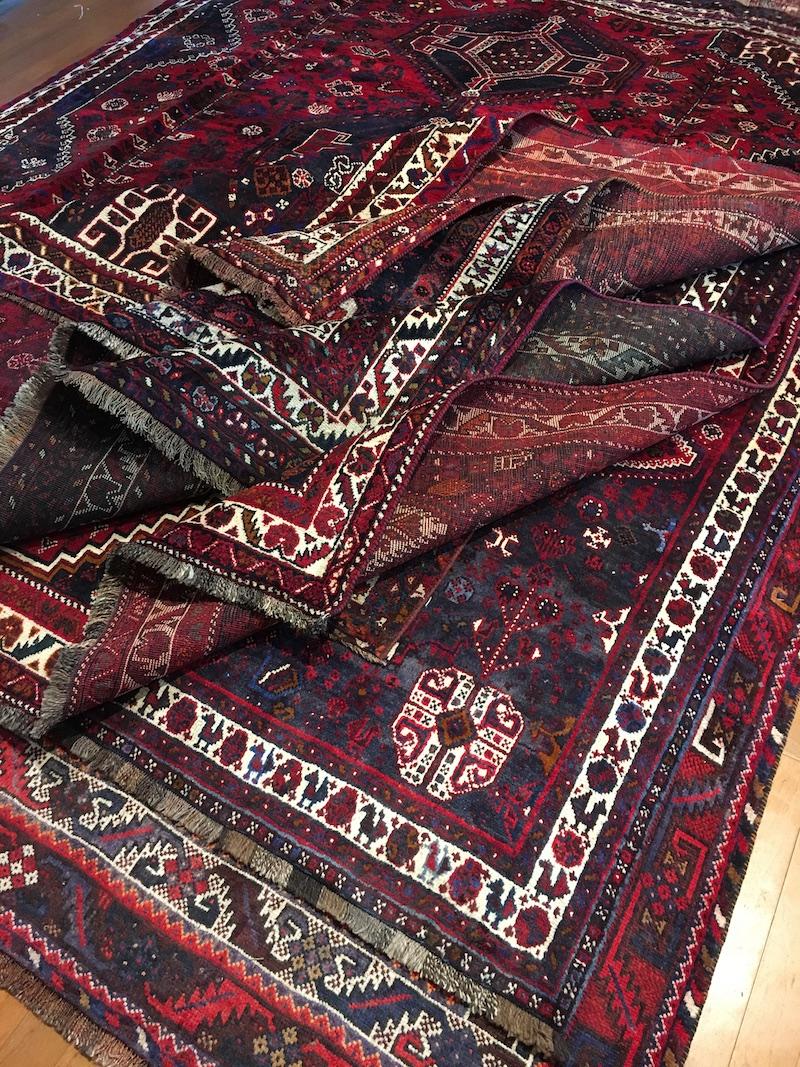 Importers and producers often complain of how inflexible Iranian weavers are. They rarely stray from the same patterns and colors they’ve been weaving for generations. The irony is that no two rugs, even if they’re made by the same clan, or the same family, are ever the same. Each weaver has her own, distinctive method of knotting, and brings her own idiosyncrasies, her own personality, and her own vision to the loom.

With a Persian rug, you never know exactly what you’re going to get. But, in a time when much of what we buy is uniform and disposable, that might not be such a bad thing.